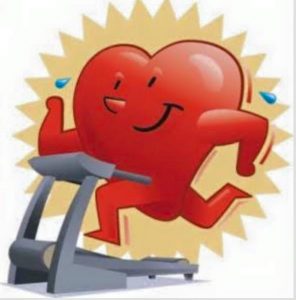 The word exercise has become so loaded, that you can’t really use it anymore without encouraging behavior which ends up being anything but healthy. Combine that with restrictive dietary protocols popular today, and what you have is a potential time bomb.

People vary in terms of their resilience and overall metabolic condition, and what may be beneficial for one has potential to cause harm to another. As you move beyond your capacity to provide energy under stress, ‘exercise’ – which under different circumstances might have lead to a positive adaptive response – can become harmful.

“Exercise elicits an immunological “danger” type of stress and inflammatory response that, on occasion, becomes dysregulated and detrimental to health. Examples include anaphylaxis, exercise-induced asthma, overuse syndromes, and exacerbation of intercurrent illnesses.”

Today’s environments are filled with an increased variety of stress promoters, some completely new to existence. Far higher quantities of polyunsaturated fats (PUFAs) and other damaging ‘foods’; different kinds of radiation; toxic chemicals in the water; plastics and heavy metals; smog; dangerous medicines and supplements; the list goes on.

Exposure to stress adds up – its effects build up in your system – which means that by the time it comes to ‘getting fit’, many are already chronically stressed, and are far more susceptible to damage from ‘too much’ or the ‘wrong’ kind of exercise.

“This study provides further evidence that the acute phase response consequent to exercise is analogous to that which occurs in general medical and surgical conditions.”

But it isn’t just the external environment that can be dangerous and inflammatory. Stress directly interferes with digestive function, impedes intestinal barrier capability and allows bacterial toxins (such as endotoxin and other stress related substances), to pass through into the main system.

The risks associated with exercise depend a lot on the type of activity, the manner in which it is performed, and how long it goes for. Other factors playing a part include weather or air quality, a person’s metabolic condition, their diet, and how they refuel before and after.

“Gastrointestinal (GI) complaints are common among athletes with rates in the range of 30% to 70%. Both the intensity of sport and the type of sporting activity have been shown to be contributing factors…gastroesophageal reflux disease (GERD), nausea, vomiting, gastritis, peptic ulcers, GI bleeding, or exercise-related transient abdominal pain (ETAP) may develop.”

Modern dietary protocols suggest sugar restriction and PUFAs (as well as other problematic things) – and generally push foods that do not provide sufficient bio-available protein (and other nutrition), or enough caloric density – promoting bacterial growth and blood sugar issues, which can multiply the metabolically interfering effects of stressful exercise.

As a person ages and more PUFAs are stored in tissue, susceptibility to the potential dangers of exercise increases. Bacterial toxins promote a rise in levels of the stress substances (such as nitric oxide, serotonin and estrogen), and when glycogen levels run low – both from the strain of exercise and the restriction of sugar – cortisol and adrenaline rise, and the polyunsaturated free fatty acids increase in circulation.

“After 4 weeks of exercise, there were significant increases in cortisol, free testosterone levels, and [lactate] activity along with a significant decrease in the ratios between testosterone and cortisol levels.”

If metabolism is further suppressed because of continuous exposure to stressful exercise, toxic substances can pass through into the main system and overload the liver, preventing proper detoxification, and causing interference with other organ systems.

As rising levels of stress substances interact with circulating PUFAs, inflammation can turn into a systemic issue, promoting a vicious circle of stress. The more suppressed the metabolism becomes, the more the effects of exercise are able to lead to further suppression.

“There was a high incidence (93% of all participants) of GI symptoms; 45% reported severe complaints and 7% of the participants abandoned the race because of severe GI distress…LPS [endotoxin] does enter the circulation after ultra-endurance exercise and may, together with muscle damage, be responsible for the increased cytokine response and hence GI complaints in these athletes.”

There are many positives which come from exercise (including circumstances arising alongside its performance), and the body’s response to stress can – at least for a while – make a person feel good (or better than before exercise), even when there is damage being done, leading to confusion.

Exposure to daylight as well as new and interesting environments; enjoyable social interactions; having something to be passionate and excited about; a sense of purpose: these and many other things that aren’t a direct physical effect of exercise, can improve metabolism and health.

Movement of varying kinds is important for proper metabolic function, and some stress – supported by sufficient energy – can lead to adaptive changes. The ‘right’ approach to exercise can powerfully promote improvement. Just raising your body temperature can be beneficial.

It’s all very context dependent, and how much is too much changes from one individual to the next. A one size fits all ‘exercise is good for you’ methodology can be dangerous, especially as a person gets older and is using exercise for healing, weight loss or illness prevention.

“…our results suggest that there is a similar risk of sudden cardiac death, due to increased whole blood viscosity, after short-term heavy or light exercise.”

“Endurance training may be associated with arrhythmogenic cardiac remodelling of the right ventricle (RV)…Although short-term recovery appears complete, chronic structural changes and reduced RV function are evident in some of the most practiced athletes…”

Chronic dieting and exercise gets more stressful and dangerous the more metabolically sensitive a person becomes. Because this kind of approach can be difficult to sustain, and can have a suppressive impact on thyroid function, it often fails to achieve long term results. What looks like ‘fitness’ – or improved endurance – can be a sign of hypo-metabolism.

“…we showed that a drop in resting metabolism during active weight loss…probably cannot be avoided by the addition of an exercise program…which may predispose to weight regain unless the participants maintain high levels of physical activity or significant caloric restriction.”

Stress and metabolic suppression can interfere with biological processes, and sometimes shows up as a disturbance in the menstrual cycle, or as a reduction in sexual function.

“Exposure to higher levels of chronic intense and greater durations of endurance training on a regular basis are significantly associated with a decreased libido scores in men.”

Although there is often great benefit from weight bearing or resistance exercise – if done excessively or inappropriately – this too can compound inflammatory issues, rather than lead to improvement or healing.

“…weightlifting resulted in profound increases in the liver function parameters…this effect was prolonged…in line with a recent study…in which all markers of muscle damage were significantly increased for up to 10 days after exercise.”

Metabolic deterioration from continuous or excessive stress – including the stress of exercise without proper nutritional support – can take time to become noticeable. The effects of stress are often cumulative, and some people – like the young and healthy with strong and resilient metabolic function – can be (or look like they are) in great shape, in spite of the fact that their training regime might be causing harm in the long run.

Studying the effects of exercise on the young, and using the findings to make recommendations for the aging or unwell, is especially risky because of certain misleading ideas which have gained a stronghold in the medical and ‘scientific’ arenas.

The impact of sugar restriction on stress regulation – in relation to cortisol, serotonin, estrogen and the polyunsaturated free fatty acids – can have far more immediate consequences for an older or sicker population.

“…this study demonstrates that brain glucose can act on serotonergic metabolism and thus can prevent exercise-induced increase of 5-HT levels.”

You Can’t Run From Depression

Incorrect physiological principles can lead to confusion regarding some of the possible effects of exercise on health and disease. It’s true that exercise of different kinds (and some of the things that go along with it) can help with depression. Chronic stress however – including anything that causes hyperventilation, inflammation, digestive distress and a rise in the thyroid suppressing substances (like serotonin, estrogen, cortisol and endotoxin) – can be a driving force behind many psychological disorders, including anxiety and depression.

Symptoms of depression can creep up over time, and the causes are often attributed to anything but exercise, especially as people tend to feel good after doing it. Other problems which arise along the way – like sleep or stomach issues, skin disorders, infections, chronic fatigue – are usually treated as though they are not related to each other or to excessive training.

For those who are already at higher risk, the dangers can be far greater and the symptom progression is often significantly less subtle. There is plenty of great new and old science available – as well as some highly skilled trainers and other practitioners – but separating fact from fiction can be very time consuming.

So by all means go for a walk, lift some weights, do some stretching, ride a bike, do whatever it is that you like to do. If you want to go for a run, maybe first run to the kitchen and grab a coke. But beware, more exercise is not necessarily better, some things that feel good now can be more harmful than realized, and popular dietary advice is often counterproductive.

I’m not a doctor or an exercise physiologist, but I believe the idea that exercise (no matter who you are, which kind and how much you do, and how you fuel it) is necessarily beneficial, might turn out to be one of the most damaging myths around. It certainly has created some pretty big industries and some huge profits.

The Impact of a 24-h Ultra-Marathon on Circulatory Endotoxin and Cytokine Profile.

Changes in blood viscosity with heavy and light exercise.

The acute phase response and exercise: the ultramarathon as prototype exercise.

Physiology and pathophysiology of splanchnic hypoperfusion and intestinal injury during exercise: strategies for evaluation and prevention.

Abdominal symptoms during physical exercise and the role of gastrointestinal ischaemia: a study in 12 symptomatic athletes.

Relationship between gastro-intestinal complaints and endotoxaemia, cytokine release and the acute-phase reaction during and after a long-distance triathlon in highly trained men.

Menstrual disturbances in athletes: a focus on luteal phase defects.

Prevalence and characteristics of asthma in the aquatic disciplines

Effects of graded carbohydrate supplementation on the immune response in cycling.

Effects of exercise on the fatty-acid composition of blood and tissue lipids.