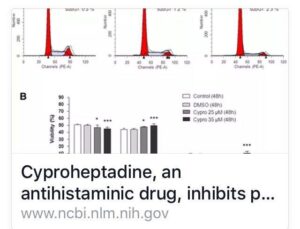 This antihistamine, cyproheptadine hydrochloride, sold under the brand name Periactin, is available from your chemist for approximately $10 for 100 4mg pills (no prescription required in Australia).

Not only has it been shown to be effective as a treatment for advanced cancer, it has many benefits and few known side effects. It helps greatly with sleep quality (and length) and has been used to improve symptoms of depression and anxiety as well as helping with migraines (and cluster headaches). It is also useful for treatment of allergies, digestive issues, withdrawal from tobacco (and other addictive substances), serotonin syndrome (often from long term use of  ‘anti-depressant’ SSRI’s and related serotonin increasing drugs) as well as many other metabolic issues.

It has been described as a wonder drug, with almost as many beneficial uses as aspirin. Unfortunately however, as a first generation anti-histamine it is no longer under patent (thus not very profitable), and its use is not heavily promoted or encouraged, nor is it very commonly used or prescribed. There are rumors floating around that it may be taken out of production some time next year.