Welcome To The Cancer Environment 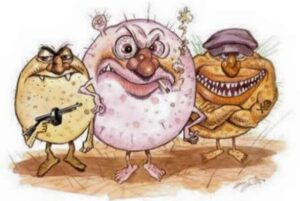 ‘The organism can only be understood in its environments, and a cell can’t be understood without reference to the tissue and organism in which it lives.’ Ray Peat PhD

When you listen to what the medical “experts” say about cancer, you might come away with the impression that there has been complete agreement – in the vast amounts of scientific literature on the subject – regarding the nature of the disease and, as such, the kinds of treatments worthy of consideration.

Even though that impression is not accurate, few people are aware that there is a long history of research and experimentation questioning the validity of the standard paradigm – which views cancer as a genetically driven disease of the cell – opening up the possibility for alternative forms of treatment.

‘The somatic mutation theory of carcinogenesis has been the dominant force driving cancer research during the 20th century. In brief, it proposes that successive DNA mutations in a single cell cause cancer…’ (C Sonnenschein, A M Soto. 2000)

‘…its…continuous invocation of ‘programs’ and ‘mechanisms’ is a reflection of inadequate metaphors borrowed respectively from computer sciences and outdated physics; organisms are neither computers nor machines.’ (Carlos Sonnenschein, Ana M Soto, 2013)

The idea, however, that cancer is not a random genetic event – but a systemic disease that can result from a wide variety of metabolic stressors – has faced significant resistance in both the scientific and medical communities, regardless of the quality of the evidence supporting it.

‘We argue that it is necessary to abandon the somatic mutation theory…We propose the adoption of an alternative theory, the tissue organization field theory of carcinogenesis…’ (C Sonnenschein, A M Soto. 2000)

‘…the tissue organization field theory…incorporates the premise that proliferation and motility are the default state of all cells, and that carcinogenesis is due to alterations on the reciprocal interactions among cells and between cells and their extracellular matrix…There are multiple examples of normalization of cells that once belonged to a cancer…’ (Carlos Sonnenschein, Ana M Soto, 2013)

The pushback to this theory arises because it threatens the status quo, suggesting that cancer prevention and treatment need not focus on discovering “responsible” genes and seeking out and destroying “guilty” cells. Moreover, it implies that the dominant approach may be more harmful than helpful.

‘In the important realm of experimental cancer research, the proposed change would mean a switch from a subcellular, gene-centric approach to a tissue-based organicist one, in which a combined top-down and bottom-up strategy would include systems biology components.’ (Carlos Sonnenschein and Ana M. Soto, 2011)

‘The regulatory power of a mass of contiguous normal cells is expressed in its capacity to normalize the appearance and growth behavior of solitary homophilic neoplastic cells…’ (Harry Rubin, 2006)

Destroying or removing “cancer cells” in the currently accepted way – surgery, chemotherapy and radiation – has been shown to have potentially dangerous repercussions by increasing the cancer-promoting capability of surrounding tissue environments.

‘Put another way, cancer results from a breakdown of tissue organization that disrupts the normal inhibitions of proliferation that are inherent in the tissue architecture of a multicellular society of cells.’ (C. Sonnenschein, et al., 1999)

Alternatively, it makes sense that any approach which can effectively improve tissue environments is likely to have the opposite effect, preventing or perhaps even reversing the spread of cancer.

‘One of the predictions of the tissue organization field theory is that carcinogenesis can potentially be reversed… Experimentally, the reversal of neoplastic behavior has been accomplished repeatedly when neoplastic cells were placed within the normal tissues from which they originated.’ (Maricel V Maffini, et al., 2005)

And the worsening of tissue microenvironments influences the likelihood that tumours will spread or metastasize. It is a circumstance that is overwhelmingly responsible for cancer mortality.

‘Metastases are defined as secondary tumors that develop at a distance from their primary originators; they are the cause of death for 90% of cancer patients…the prevailing consensus is that metastases are not explained accurately, and, more importantly, they are far from being successfully managed.’ ( Carlos Sonnenschein, Ana M Soto, 2015)

‘…behavior of normal cells is ordered by their topological relations in tissues and other homeostatic influences of the organism. Weakening of these ordering relations may contribute to malignant transformation…’ (H Rubin, 1990)

‘…cancer metastases, as their primary cancers, are not cell-based events but represent, instead, tissue-based phenomena.’ ( Carlos Sonnenschein, Ana M Soto, 2013)

Rather than random genetic mutations driving the creation of “cancer cells”, based on good quality evidence, it makes sense to see biological stress as the central factor in the development of an internal cancer environment.

Continuous stress interfering with metabolic energy – or exceeding the amount required to cope with stress – can be one general way of understanding how the conditions come about that change the tissue, damage the cells (as well as DNA), and encourage cancer.

‘We challenge the notion that cancer is a cellular problem caused by mutated genes by assessing…an alternative view that regards carcinogenesis as a developmental process gone awry.’ (Ana M Soto, Carlos Sonnenschein, 2005)

‘…interactions among different components of a tissue cannot be reduced to cellular events…carcinogenesis takes place at the tissue level of biological organization……while normal cells already carry mutations, they do not end up becoming cancer cells…From this perspective, these mutations would be irrelevant as suggested by the repeated instances where cells from diverse cancer types were normalized when placed within a normal field.’ ( Ana M Soto, Carlos Sonnenschein, 2011)

The stress substances – including cortisol, serotonin, endotoxin, nitric oxide, estrogen, lactate, and other inflammatory and fibrotic things – often increase side by side with aging. And they, directly and indirectly, impact the ability of tissue environments to protect against (or reverse) the cancer behaviour of the cell.

‘…damage accumulates with age, as does an increasingly permissive local environment for tumor growth…The order that controls heterogeneity is weakened with age and contributes to the origin and progression of disordered growth.’ (H Rubin, 1999)

Increased circulation of bacterial endotoxin (LPS or lipopolysaccharide) is one thing that is known to promote inflammatory conditions, which can induce cancer development and metastasis.

Polyunsaturated fats (PUFAs) get stored in (and released from) the tissue. And they are a fundamental and powerful driver of inflammation and the growth and spread of cancer.

Endotoxin and PUFAs promote nitric oxide (NO), and NO is another potent mediator of inflammation, which plays a role in developing a tissue environment that is increasingly capable of promoting cancer initiation and progression.

‘…these data suggest that, in head and neck cancer, the increased NOS activity can be regarded as a novel biologic marker for tumor progression related to angiogenesis…’ (Oreste Gallo, et al., 1999)

‘…role for NO production from iNOS in human lung cancer because high concentrations of this short molecule may transform to highly reactive compounds such as peroxynitrite; moreover, through the upregulator NF-kB, they can induce a chronic inflammatory state representing an elevated risk for cell transformation to cancer.’ (Speranza L, et al., 2007)

Exposure to chronic or acute stress wastes blood sugar reserves. In addition, it leads to increased release of stress substances (including bacterial endotoxin) and a rise in systemic levels of polyunsaturated free fatty acids.

The combination of many of the above factors can be a significant determinant of the stress conditions that promote tissue damage, genetic changes, blood sugar dysregulation, and the irregular cell activity of cancer and related metabolic illnesses.

‘…chronic periods of stress can be detrimental to health by increasing inflammation and promoting the progression of diseases including cancer…we show that chronic stress restructures lymphatic networks within and around tumours to provide pathways for tumour cell escape.’ (Caroline P. Le, et al., 2016)

‘Our findings provide a hitherto-undescribed direct role of increased aerobic glycolysis in inducing the cancer phenotype, in which increased glycolytic activity regulates the canonical oncogenic pathways…additional evidence for how hyperglycemia in diseases such as obesity and diabetes could provide a microenvironment that results in higher risk of some cancers.’ (Yasuhito Onodera, et al., 2013)

Estrogen levels are known to rise due to ongoing exposure to inflammatory stress substances, potentially causing genetic changes and cancer development. Estrogen blood tests do not account for the amount of estrogen trapped in tissue that causes the most harm.

‘…findings suggest that exposure to estrogen…is capable of driving genomic instability, a well-defined early event in breast cancer development. Given that estrogen levels in normal/benign breast tissue are known to be 6-7 times that of circulating estrogen levels, our findings suggest a mechanism through which BRCA1 carriers, through enhanced production of DNA damaging estrogen metabolites, may acquire the genetic alterations that initiate neoplastic transformation in breast tissue…Similarly, levels of estrogen in ovarian tissues greatly exceed that of circulating estrogen, suggesting that this model may also explain the substantially increased risk of ovarian cancer in BRCA1 carriers…’ (Kienan I Savage, et al., 2014)

‘The knowledge that breast cancer in women is associated with prolonged exposure to high levels of estrogens gives relevance to this model of estrogen induced carcinogenesis…’ ( J Russo, Irma H Russo, 2006)

Avoiding consumption of the PUFAs and eating high-quality protein – from milk, cheese and gelatinous cuts of meat – and simple and easy-to-digest sugars – from sweet ripe fruit, fruit juice, white sugar and honey – is a potentially powerful approach to suppressing stress. It helps regulate blood sugar and lower exposure to dangerous fats (ingested and stored in tissue). It is also a logical way to improve tissue organization, redirecting cellular behaviour away from cancer progression.

‘…these observations may lead to a new paradigm for control and treatment of cancer in situ…it may be possible to redirect tumorigenic cells to normal cell function by exposure to substances present within normal tissues.’ (Karen M Bussard, et al., 2010)

Some other things that protect include increasing carbon dioxide levels (with bag breathing or adaptation to higher altitudes, for example), exposure to daylight, therapeutic use of red light and pregnenolone and progesterone supplementation. And vitamins E and A, caffeine, glycine, aspirin, and the antihistamine cyproheptadine.

Alternatively, things that lower stress and allow thyroid metabolism to function more effectively (including the therapeutic use of white sugar) are likely to be very helpful.

‘A deeper understanding of the role(s) of tissue and tumor microenvironments in the pathogenesis of cancer is essential to design more effective strategies for the management of this disease.’ (Ezio Laconi, et al., 2008)

‘…if a cancer cell exists as a discrete entity distinguishable from a normal cell, it has certainly been very uncooperative in revealing what it has ‘invented’ to deserve the fame it has acquired. More to the point, cells isolated from cancers revert to normalcy when placed in a normal microenvironment.’ ( Carlos Sonnenschein, Ana M Soto, 2013)

Peskin BS, Carter MJ. Chronic cellular hypoxia as the prime cause of cancer: what is the de-oxygenating role of adulterated and improper ratios of polyunsaturated fatty acids when incorporated into cell membranes? Med Hypotheses. 2008;70(2):298-304.

San-Millán I, Brooks GA. Reexamining cancer metabolism: lactate production for carcinogenesis could be the purpose and explanation of the Warburg Effect. Carcinogenesis. 2017 Feb 1;38(2):119-133.

Sonnenschein C, Soto AM. Somatic mutation theory of carcinogenesis: why it should be dropped and replaced. Mol Carcinog. 2000 Dec;29(4):205-11.

Soto AM, Sonnenschein C. The tissue organization field theory of cancer: a testable replacement for the somatic mutation theory. Bioessays. 2011 May;33(5):332-40.

Amount
From AUD
To USD