Sugar Isn’t As High As You Think. 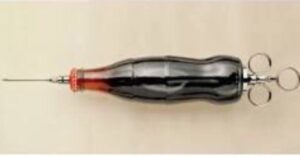 Although plain old white sugar has been blamed for increased rates of obesity and degenerative disease, statistics show that the intake of sugar per capita (including both sucrose and HFCS), has stayed roughly the same, even lessened, over the past forty or fifty years.

Foods that are being consumed in significantly greater amounts are the polyunsaturated fats and cereal grains, accounting for roughly a 25% increase in caloric intake.

The United States is the worlds largest producer of corn, soybeans and wheat, and the USDA dietary recommendations from the last few decades or so have played a significant role in the promotion of these foods.

The idea that sugary soda drinks are directly responsible for increased rates of obesity and other conditions has not proven to be a scientifically valid argument. In fact statistics relating to the consumption of these products point in the opposite direction.

As soon as you begin to restrict intake of sugary foods including ripe fruit and juices, soda, honey, milk (and even some starchy vegetables), leading to glycogen stores eventually being diminished, your body starts to release increased amounts of the stress hormones adrenalin and cortisol, as a kind of ’emergency’ or secondary means for the provision of alternative fuels.

Adrenalin helps to draw out any remaining glucose from the liver as well as causing stored fat to be released into the blood for fuel, and cortisol breaks down valuable muscle and tissue for conversion into necessary sugar.

Increased levels of cortisol are associated with practically every inflammatory or degenerative disease, including cancer, diabetes and the so called ‘autoimmune’ conditions.

Cortisol directly suppresses the immune system, and promotes the release of a cascade of inflammatory substances, including serotonin, estrogen as well as the stored polyunsaturated fats.

The release of the free fatty acids from storage, although necessary (even under normal circumstances) for survival, especially during temporary conditions of starvation or stress, have become a dangerous mediator of inflammation and disease.

This is directly due to the large amounts of polyunsaturated fats stored in the tissues for the first time in human history, as a result of new industries and dietary recommendations.

Increased consumption of starchy grains and other difficult to digest materials irritate the digestive system, promoting bacteria and it’s toxic by-products (namely endotoxin), which interact with the polyunsaturated fats, directly increase the secretion of the stress hormones and interfere with blood sugar regulation, once again promoting inflammation, degeneration and disease.

The combination of these factors can powerfully suppress thyroid function and metabolism, impeding the ability of cells to effectively utilize available glucose for fuel, often eventually promoting weight gain.

In reality, the manufacturer’s of many of the so called high sugar foods, are more and more, replacing sucrose with starch or pure glucose, as well as filling them with harmful levels of the anti-metabolic polyunsaturated fats and many other toxic and poisonous disease and inflammation promoting chemicals and other cheap and dangerous ingredients.

Pushing up consumption of sugar alone is unlikely to be enough (in the long term) to solve many of the issues mentioned above.  A diet, however, removing the polyunsaturated fats as much as possible and getting plenty of protein and nutrients from milk and cheese and gelatinous cuts of meat, whilst at the same time substituting the starchy grains and other pure glucose products with greater amounts of simple sugar from sweet ripe fruit, fruit juice, white sugar and honey, is one possible approach to improving metabolism and overall health, whilst simultaneously encouraging the gradual and safe removal of the inflammatory fats and other toxic substances stored in the tissue.

Are you aware of the rising quantities of polyunsaturated fats and other toxic ingredients hidden in your food?

The effect of fatty acids on the vulnerability of lymphocytes to cortisol.

Sucrose substitution in prevention and reversal of the fall in metabolic rate accompanying hypocaloric diets.

Image: To All.For Living Wonderfully:”Sugar Can Make You Dumb, US Scientists Warned “