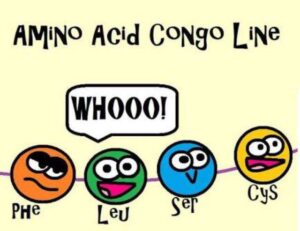 Exposure to stress of any kind depletes glycogen stores in your body at an increased rate and as such, can create an immediate need for sugar.

When glycogen in storage begins to run low – and if enough sugar is not being provided from food – one way your body can compensate is with the release of the stress hormones adrenalin and cortisol.

Cortisol is used in part by the body to break down muscle tissue into amino acids for conversion into glucose.

Whenever muscle tissue is broken down (or large amounts of pure muscle meat is consumed), higher amounts of the inflammatory amino acids – tryptophan, cysteine, methionine and histidine – are released into circulation in the blood.

Increased free circulation of these amino acids directly and indirectly leads to the suppression of thyroid metabolism and energy systems, as well as interference with immune system function.

Tryptophan is the precurser to serotonin – thus it’s consumption and increased release into circulation causes serotonin levels to rise – another factor in the suppression of thyroid and immune system function, as well as the promotion of inflammatory disease.

Histidine  – the precursor to histamine – when circulating in increasing quantity, can also be a significant factor in relation to the advancement of issues of inflammation and degeneration.

Adrenalin (as well as a combination of some of the above factors) encourages the release of free fatty acids into the blood stream which – particularly when polyunsaturated – can once again cause further release of cortisol (and adrenalin), helping to create a vicious cycle of stress and the promotion of increased rates of aging, inflammation and disease.

It is important to keep in mind that continuous stress – and thyroid suppression in general – can in many cases be enough to trigger the beginnings of issues in relation to inflammation as well as immune system dysfunction. This is equally true in reverse, as none of these states or conditions can realistically be seen as being independent of each other.

Because of the fact that the consumption of sugar from ripe sweet fruits, fruit juice, milk, honey and white sugar – and to a lesser extent, well cooked starchy vegetables, like potato – can have such powerfully protective anti-stress effects, increasing their intake (as an alternative to many other more problematic foods) has the potential to be a safe and reasonable approach to help improve a wide variety of disease states which one way or another, are impacted upon by excessive inflammation, interference with immune system function and metabolic under-performance in general.

Supplementing with gelatin – or choosing the more gelatinous cuts of meat – can help to protect against inflammatory effects, providing far less of the problematic amino acids, and more of the protective anti-inflammatory amino acids, particularly glycine.

In some ways, glycine (or gelatin more generally) – much like sugar – can be looked upon as a kind of antidote to the stress promoting effects of excess circulation of the inflammatory amino acids. This is regardless of whether levels are rising due to consumption of the muscle meats alone, or as a result of rising cortisol levels (due to stress or sugar restriction), or a combination of both.

In this sense, when it comes to any discussion about the damaging and disease promoting effects of chronic stress – at least as far as diet is concerned – few combinations could be worse than the low sugar, high polyunsaturated fat, high muscle meat diet popularly promoted as healthy in many circles today.

You can’t however, have a conversation with regards to the ongoing influence of stress in relation to inflammation and immune system dysfunction without mentioning some of the ways metabolic suppression and disease in general is connected to issues of digestion and excessive levels of bacteria and endotoxin.

Although it is probably true that a lack of sugar, too much exposure to the polyunsaturated fats and an inflammatory balance of circulating amino acids is likely enough to drive the gradual worsening of such digestive issues, it is worthwhile remembering the importance of limiting the intake of large amounts of the grains, beans and legumes and other starchy and fibrous materials, including too much under cooked vegetable matter.

Broadly speaking, experimentation with a combination of the above ideas can be seen as an appropriate and potentially highly effective means to protection – or recovery – from inflammatory disease and immune system interference in general, or in other words, overall resilience to stress.