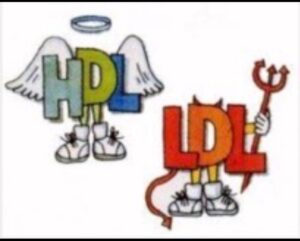 Does that sound familiar? I appreciate the concern but do me a favour. Please don’t “fix” my cholesterol because I know what you mean when you say that. I know what you’re going to do to bring the numbers down. You’re going to give me a statin, aren’t you? Or maybe you’ll recommend more “heart-healthy” cholesterol-lowering oils. Anything to get me into the “healthy range”, right?

I know you’re the expert, but it concerns me that you don’t correctly understand cholesterol. You don’t sound aware of what it is or what it does. You don’t seem to know what it means if it is or isn’t in the healthy range. And I get the feeling you won’t understand why I don’t want you to do “anything it takes” to bring it down because you don’t know what damage you’re doing.

I’m aware that some might say I’m exaggerating or going on about this issue. And some might even go as far as to call me a tin foil hat-wearing conspiracy nut. But thankfully, there is still some good biology available for those willing to spend some time reading, even if it does mean reading things that don’t come up at the top of an internet search. You might read a few biological experiments or even a biology textbook; although these things are no guarantee anymore, it is a start.

The truth is that good quality information isn’t necessarily that hard to find, but most people, including health professionals, don’t have much time to search for it. As a result, it’s far easier to be spoon-fed information by the so-called authorities. So I think some accurate cholesterol information needs to get brought to light to at least begin to reverse some conditioning or brainwashing that has taken lots of time and money to cement.

Decades worth of fear-mongering misinformation regarding cholesterol and a few related things has created what can get described as a deeply entrenched belief system, so much so that the term “high cholesterol” can evoke an immediate sense of unease or foreboding.

Objectively speaking (if that’s still allowed), cholesterol isn’t anywhere near the problem it gets made out to be. It isn’t a problem, at least not how “they” say it is. But much like with some other things (hint hint, sugar), it can become involved with different problems and then get wrongly blamed for those problems.

The truth about cholesterol is it’s there to help you. So you don’t want to eliminate or interfere with its production. And you don’t need to worry about the cholesterol content in food. And even though it might sound wrong, you don’t want to bring it down into the “healthy range”, at least not using the methods most commonly recommended.

You want your cholesterol to be near the “normal” range due to your metabolism being close to “normal”. Not because you took something that creates the impression that you’re healthy on paper when in truth, you’re less healthy than before the cholesterol was “fixed”.

I know it’s a simplistic analogy. Perhaps it’s a little more complicated, but you get the point. What you want to do is deal with the issues that cause the fires (or that stop firefighters from being able to do their job effectively), not blame the firefighters because they’re at the scene of the fires, doing their best to help.

So if your blood cholesterol levels are rising, rather than it being a sign you have too much cholesterol (sneaky cholesterol), it’s more likely a sign something is interfering with thyroid energy metabolism. It’s preventing cholesterol from being effectively converted and used in a more specialised way.

But unconverted cholesterol is still helpful in its own right. For example, cholesterol has immune system functions, is anti-inflammatory, and directly protects against infection, poison, and toxins. So another way to understand “high cholesterol” is that you might produce extra cholesterol as a protective response to stress or some form of toxicity.

Another thing worth mentioning is that there is lots of evidence pointing to the fact that rising cholesterol as you age helps keep you alive. Low cholesterol, on the other hand, is hazardous. It makes you more susceptible to many degenerative conditions, most commonly cancer.

So you could say rising cholesterol protects you in the background when your health is not optimal, when you’re under a lot of stress, and your metabolism is under-functioning. That means cholesterol is probably the last thing you want to try to eliminate.

In any case, that doesn’t mean you can’t do things to improve your situation, which ends up lowering cholesterol. Just not the way most people get told. It would help if you looked at it differently. You can try to identify the underlying issues causing the increased cholesterol. If you deal with those, the “cholesterol issue” will improve. That’s completely different. Then you’re not getting rid of cholesterol; you’re getting rid of the reason cholesterol is rising.

Do you have an infection, or are you being exposed to things that promote stress, causing you to produce more cholesterol? Is something interfering with the conversion of cholesterol into protective substances? That can be anything that interferes with thyroid function or maybe just a vitamin A deficiency.

By improving overall metabolism, you can lessen the issues associated with cholesterol problems, and the consumption of polyunsaturated fats (PUFAs) and sugar avoidance are two common metabolism-inhibiting factors.

The PUFAs get promoted as “heart healthy” because they lower cholesterol levels. Still, they do this not by improving metabolism and cholesterol conversion but by interfering (like statins) with cholesterol production.

Worse, the PUFAs damage cholesterol, promote inflammation, and powerfully prevent thyroid energy system function, making them anything but good for the heart’s health. They get marketed as being suitable for “fixing” cholesterol issues, but what they’re good at is causing the problems that then get blamed on cholesterol.

Conversely, sugar helps with cholesterol production, fuels thyroid energy metabolism, improves cholesterol conversion, and generally lowers stress. As a result, sugar reduces cholesterol requirements and protects against exposure to PUFAs released from storage due to excessive stress. So sugar is good at fixing the problems that get used to make cholesterol the bad guy.

I’m not a doctor or dietician; this isn’t medical or nutritional advice. Still, from what I have read, seen, and experienced, this is a logical and coherent way to understand cholesterol. I don’t believe the official theory holds up, and continuously adding to it doesn’t help it make more sense. So it’s worth looking at the science which contradicts the mainstream view, and there’s plenty of it.

If you like what I have to say and want even more information (including lots of studies) demonstrating metabolically sound ways to look at cholesterol, please check out my other articles on cholesterol, including To Hell With Cholesterol Phobia in The Thyroid, Cholesterol, Happy Heart eBook.

Amount
From AUD
To USD