Do Your Aspirin Drills 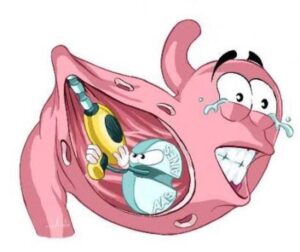 It’s extremely common for people to say that aspirin is dangerous, damages the intestines, thins the blood, and causes stomach ulcers and uncontrollable bleeding, but you can’t necessarily trust everything you hear.

I’m not a doctor, and I’m not here to give medical, or any other advice. (Always consult your friendly neighbourhood doctor before making medical/pharmaceutical decisions.) I’m not disputing the fact that medicine/science has found some association between aspirin use, and intestinal harm or bleeding issues. But there is also a lot of good scientific/medical evidence, demonstrating that the risks have been, at the very least, overblown. Some have said, claims that aspirin use is risky, began to ramp up, as newer, more profitable drugs came on to the market.

“…deaths attributable to bleeding in subjects randomised to aspirin were 3.9 per 100 000 subjects per year and 5.1 per 100 000 per year in those on placebo…no evidence of any extra cerebral bleeds in 10 000 patients randomised to aspirin…it seems unlikely that aspirin is responsible for peptic ulceration let alone fatal ulceration… low-dose prophylactic aspirin would seem to be remarkably safe, probably far safer than implied…” (P. Elwood, G. Morgan, 2015)

“Of greatest relevance to the risk of prophylactic aspirin is however the risk of a fatal GI bleed in subjects who take low-dose aspirin, relative to the risk in those who take no aspirin…There is no evidence of any significant increase in fatal GI bleeds attributable to aspirin. The risk of death from a bleed is: 3.7 ± 1.6 per 10,000 in subjects randomised to aspirin, and 4.7 ± 1.8 per 10,000 in subjects who had been randomised not to receive aspirin..” (Peter C. Elwood, et al., 2016)

“Of 717 patients with NVUGIB [nonvariceal upper gastrointestinal bleeding] 56 % (402) were taking at least one antithrombotic agent. Seventy-eight (11 %) patients died in hospital, and 310 (43 %) had severe bleeding…being on aspirin was protective against in-hospital mortality, rebleeding, and predictive of a shorter hospital stay…patients who bled on aspirin were less likely to die in hospital of uncontrolled gastrointestinal bleeding and systemic cancer…” (Wehbeh A, et al., 2015)

Statistics can be interpreted in lots of different ways, some that can make the dangers of a particular thing (like aspirin use), seem far greater than they actually are. Interpretations of study results, often accidentally (sometimes even intentionally) conflate the use of harmful NSAIDs (Nonsteroidal Anti-Inflammatory Drugs), with aspirin use, making aspirin look bad.

Not to mention that over the years, there have been numerous studies showing aspirin damaging the lining of the stomach or causing bleeding, which appear to have been poorly designed, often ignoring other factors responsible for problems, or using excessively high, inappropriate doses, leading to conclusions lacking real life relevance regarding aspirin.

And apart from being one of the only NSAIDs, known not to cause serious damage to the intestines, aspirin has even been shown to protect against intestinal lesions caused by other NSAIDs, in a dose dependant manner.

“All NSAIDs tested, except ASA [aspirin], caused hemorrhagic lesions in the small intestine…ASA did not provoke any damage…and prevented the occurrence of intestinal lesions induced by indomethacin, in a dose-related manner.” (Takeuchi K, et al., 2001)

In fact regular use of aspirin has been found to be protective for the intestines, against many different irritants, and has also been proven to help safeguard against gastric, colon, and other varieties of cancer.

Excessive biochemical stress and inflammation, are well known to damage the intestines, interfere with digestive function, and promote bacterial and other microbial issues. Aspirin is protective against stress, inflammation, and microbial overgrowth.

Bacterial infections have been shown to be a factor behind the development of intestinal ulceration and bleeding, often blamed on aspirin. Aspirin is one thing which can help protect against bacterial infections, and can also have a powerful synergistic relationship with antibiotics.

“This study aimed to determine…if (and by how much) infection alters the baseline risk of peptic ulcers during LDA therapy…analysis suggests that H. pylori increases the risk of LDA ulcers by almost 70%…” (Sarri GL, et al., 2019)

“…aspirin and salicylate significantly inhibited the growth of H pylori…and reduced the efficiency of colony formation and colony size…aspirin could inhibit the growth of other bacterial species…and increases the susceptibility to antimicrobial agents…” (Wang WH, et al., 2003)

“Aspirin has been found to be…safe in patients harboring cerebral aneurysms and clinical studies provide evidence that it may decrease the overall rate of rupture.” (Starke RM, et al., 2015)

“…there was a mortality benefit from anti-platelet drugs irrespective of their bleeding risk…there was no increased risk of bleeding in cancer patients who received aspirin in the setting of acute coronary syndrome, even in patients with a platelet count of less than 100,000/μl…studies suggest the benefit of aspirin even in patients with thrombocytopenia…” (Philip Toner, et al., 2015)

“We identified substantial reductions in the early risks of all stroke, ischaemic stroke, and acute myocardial infarction with aspirin…up to a 90% reduction in early risk of disabling or fatal recurrent ischaemic stroke after TIA and minor stroke.” (Rothwell PM, et al., 2016)

“…aspirin use is associated with a reduced risk of gastric, esophageal, colorectal, pancreatic, ovarian, endometrial, breast, and prostate cancers, and small intestine neuroendocrine tumors…The longer those who had used aspirin, the lower their risk of cancer was…” (Yan Qiao, et al., 2018)

“…we found that users of low-dose aspirin had a 70% reduction in gastric cancer risk when compared with nonusers…the risk reduction of gastric cancer by aspirin was greater among H. pylori–infected subjects…” (Ka Shing Cheung, et al., 2018)

Doesn’t it seem a little strange, that aspirin can be so good at protecting against diseases like cancer and stroke and heart disease, that are promoted by inflammation, bacterial endotoxin excess, and damage to the digestive system, the very things that help promote issues that aspirin is so often blamed for?

The ability of aspirin to protect against the inflammatory effects of systemic exposure to bacterial endotoxin, is one thing which has been shown to prevent the metastasis of colon cancer. Aspirin also appears to protect against the development of Barrett’s oesophagus in patients with gastro-oesophageal reflux disease (GORD).

“…lipopolysaccharides (LPS) could enhance the metastasis potential of…colon cancer [CRC] cell lines….aspirin effectively decreased the metastasis capacity of colon cancer cells…Aspirin treatment lead to the downregulation of TLR4…which resulted in the decrease of…cells migration…induced by LPS…aspirin not only can reduce the occurrence of CRC but also reduces the risk of metastasis in CRC…” (Ying J, et al., 2018)

“Our molecular investigations have yielded a potential explanation for case-control studies finding that aspirin protects against the development of Barrett’s oesophagus, while other NSAIDs do not…” (Huo X, et al’, 2018)

Aspirin can also inhibit biofilm formation from Candida albicans infection. Drug resistance of biofilms, is known to make the treatment of infections difficult. Salicylate has also been used to make E.coli infections more treatable with certain types of antibiotics.

“…aspirin possesses potent antibiofilm activity in vitro and could be useful in combined therapy with conventional antifungal agents…Pathogenic fungi in the genus Candida can cause…serious systemic diseases and are…important agents of hospital-acquired infection…Aspirin…can inhibit the production of some of these components by as much as 95%…” (Mohammed A. S. Alem, L. Julia Douglas, 2004)

Dissolving aspirin in water and consuming it with a meal, has been shown to help avoid or minimize initial irritation, oftentimes caused by added excipients or binding ingredients. Consuming aspirin with equal parts sodium bicarbonate or glycine (or both), has been demonstrated to protect against intestinal damage. High doses of aspirin can deplete glycine, and glycine depletion is known to be involved with aspirin issues.

“Use of low doses of enteric-coated or buffered aspirin carries a three-fold increase in the risk of major UGIB [upper-gastrointestinal bleeding]. The assumption that these formulations are less harmful than plain aspirin may be mistaken.” (Kelly JP, et al., 1996)

“In contrast to plain ASA, where 9 of 10 volunteers reported gastrointestinal side effects, all subjects receiving ASA in combination with glycine did not complain from any dyspeptic symptoms, i.e. epigastric pain etc.” (Müller P, et al., 1991)

A small amount of vitamin K2 taken with aspirin, has been shown to help prevent minor bleeding or bruising issues, which can arise for some people with regular (especially high dose) aspirin usage.

For those who are interested, there are also studies showing aspirin use can improve fertility, and protect against preeclampsia and miscarriage. And aspirin has been used to effectively treat psychiatric and neurodegenerative disorders, including depression, schizophrenia, bipolar disorder, and Alzheimer’s disease.

There is also evidence suggesting that aspirin, taken before bed, can reduce the impact of night time stress, lower blood pressure, protect against early morning heart attacks (the most common time when stress is highest), and potentially improve sleep or ameliorate the negative effects of lack of sleep.

Are you surprised that the potential risks associated with taking aspirin, are so heavily promoted, and the multitude of life saving benefits from regular aspirin use, are not so well known?