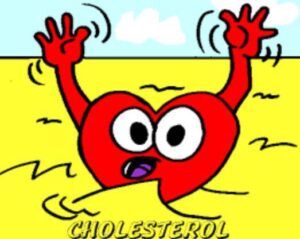 Even though it’s true that high cholesterol is an indicator of sub-optimal thyroid function and metabolism, the relationship between saturated fat consumption, increasing cholesterol levels in the blood, and heart disease, is not as black and white as it has been made out to be.

This diet-heart hypothesis has stuck around, partly due to confusion regarding the biological significance of cholesterol, and partly because of the promotion of poor quality information encouraging the belief that lowering cholesterol with increased consumption of polyunsaturated fats (PUFAs) and other popular methods, is a good idea.

Unfortunately however (for a number of physiologically justifiable reasons), the results of the ‘lipid hypothesis’ experiment – in relation to how it can be shown to have impacted upon cardiovascular health, as well as overall degenerative disease outcomes – have not been overly positive.

“…collective findings from randomized controlled trials do not provide support for the central diet-heart tenet that the serum cholesterol lowering effects of replacing saturated fat with linoleic acid translate to lower risk of coronary heart disease or death.”

Context is very important here, and so although there are some things that are legitimately more harmful than others, even the best foods can be problematic in the right circumstances, and people have the potential to withstand large amounts of stress.

“…high cholesterol may reflect the presence of factors promoting coronary heart disease, which may outweigh the beneficial effects.”

Because, however, there are so many biological, dietary, and other environmental factors, which can simultaneously promote inflammation and negatively impact upon metabolic health, it’s not really as simple as being a case of ‘just follow these guidelines and you’ll be fine.’

“Coronary artery disease pathogenesis and treatment urgently requires a paradigm shift. Despite popular belief among doctors and the public, the conceptual model of dietary saturated fat clogging a pipe is just plain wrong.”

An holistic approach which considers the way that the cumulative effects of many different kinds of stress, can impact upon metabolic function, causing degeneration and disease, is likely to be far more illuminating.

Without a deeper understanding of some very well demonstrated biological concepts – like the protective nature of cholesterol, and the genuinely anti-inflammatory effects of the saturated fats – the thyroid suppressing anti-metabolic polyunsaturated fats (PUFAs) are likely to continue to get a free pass.

“There is also a growing understanding that an inflammatory response…is a crucial step in the genesis of atherosclerosis…many observations…conflict with the LDL [low-density lipoprotein]…hypothesis…high serum cholesterol and/or high LDL is protective against…atherosclerosis.”

“The inflammatory processes that contribute to cholesterol deposition within the artery wall and subsequent plaque formation (atherosclerosis), more closely resembles a ‘pimple’.”

Under conditions of severe or ongoing stress – and wherever there is systemic inflammation or simply injury of any kind – cholesterol levels tend to increase as part of a basic physiologically defensive response.

Cholesterol is a fundamental ingredient for the production of the most protective substances – including pregnenolone, testosterone, progesterone and DHEA – and proper thyroid function is crucial to the process which enables their supply.

As you age – and whenever thyroid metabolism slows – cholesterol remains as what can be seen as a last line of defense against stress, as less of the more specialized biochemical materials are able to be produced.

All PUFAs Are Unstable

The breakdown products of the polyunsaturated fats interfere with the ability of the body to produce cholesterol, and are one of the most powerful suppressors of thyroid function and energy metabolism.

On top of this, they have been clearly demonstrated to be a central factor in the promotion of inflammation. The saturated fats on the other hand, are stable and have many anti-inflammatory protective effects.

Sufficient consumption of sugar, assists in the production of cholesterol as well as thyroid hormone, supporting metabolic energy systems and helping to produce enough of the defensive substances – like for instance pregnenolone – as required, generally limiting stress and inflammation.

“…observed…a mechanistic foundation for considering pregnenolone…as a naturally-occurring substance for use therapeutically to suppress unwanted vascular inflammation without the adverse effects of glucocorticoids.”

Stress interferes with digestion, eventually allowing greater amounts of bacterial endotoxin to enter the main system where they interact with circulating polyunsaturated fats and iron, creating the inflammatory conditions which damage the arteries.

“LPS [endotoxin] molecules are potent inflammagens…known to induce the production of a variety of pro-inflammatory cytokines…central to the development of inflammation…A further characteristic of systemic inflammation is a hypercoagulatory state…a common pathology underlying all thrombotic conditions, including ischaemic heart disease…”

Cholesterol plays a fundamental role in the attempt to heal any arterial damage which arises, and can itself be damaged in the process as a result of coming into contact with the toxic things in circulation (like endotoxin and PUFAs), then often being unfairly left to take the blame.

The saturated fats assist in protecting against the things which promote inflammation and disease, and can be produced by the body when an excess of sugar is consumed.

“Far reaching metabolic effects occur as a consequence of exposure to bacterial endotoxins…it would appear that the majority of the effects of endotoxin…are mediated by prostaglandins…Coconut oil completely abolished the responses to endotoxin.”

Not All Fat Is Made Equal

“…we demonstrate that n-6 PUFA-rich corn oil diets…can have a functional consequence in the heart within 5 weeks…these findings represent a novel pathway of cardiolipotoxicity associated with LA [linoleic acid], a fatty acid increasingly present in Western diets…”

Excessive intake of fat – even the best kinds of fat – can interfere with proper metabolic function, and can create the metabolic conditions which over the longer term, can cause the onset and advancement of cardiovascular and other degenerative diseases.

As a result of greater exposure to the inflammatory stress related biochemical substances, the job of the liver is made more difficult, further interfering with thyroid hormone and cholesterol functions, increasing estrogen circulation. Estrogen promotes the release of polyunsaturated free fatty acids, and strengthens the inflammatory effects of circulating PUFAs, encouraging a vicious circle like scenario.

All of this gets in the way of the many protective roles of cholesterol, and can lead to the inflammatory conditions which are connected to arterial damage and cardiovascular disease, and all of this is made worse when sugar is removed from the diet and blood sugar is unstable.

Sugar consumption (in the context of a pro-metabolic diet) promotes liver performance, cholesterol production and utilization, thyroid hormone function on numerous levels, saturated fat creation, protection from stress substance excess and high free fatty acid exposure, as well as a reduction in overall inflammation and basically all of the things that have been demonstrated to actually increase heart disease progression.

The idea that LDL [low-density lipoprotein] must be lowered (via interference with production) because it is ‘bad’, and HDL [high-density lipoprotein] is “good’ and should therefore be increased, can be seen to be misleading, once you consider their physiological functions, for instance in relation to supply of pregnenolone and other protective substances.

Although it’s true that cholesterol levels will naturally come down to a more optimal level as metabolism improves (and more is converted into the protective steroid hormones), there is evidence showing that low LDL (resulting from some form of interference with metabolism and the normal production of cholesterol) is a predictor of disease and death, particularly from cancer.

“We recently reported, in a meta-analysis of statin trials, a strong association between low concentrations of low-density lipoprotein (LDL-C) and incident cancer risk…extending over 18 years prior to diagnosis.”

HDL on the other hand has been shown to increase in response to stress and inflammation, helping to protect against toxic substances – like endotoxin – which make their way into the main system due to metabolic issues (impacting upon thyroid and digestion), and an increase in levels has been correlated with rising susceptibility to heart disease.

Cholesterol itself is not the problem, and although high cholesterol reflects issues with metabolic performance, when the production of cholesterol is interfered with, susceptibility to disease and death increases.

It is important to understand that cholesterol plays a fundamental role in the maintenance of health, and that the only really safe way to bring levels down (closer to an ‘ideal’ range) is by removing the stressors causing the original disturbance, and by improving metabolic function.

But keep in mind that as you age, or whenever you are exposed to stress or disease or injury, rising cholesterol levels can be protective, and are one of the things which help to keep you alive, whenever your system is under pressure.

Apart from the removal of the polyunsaturated fats, and the inclusion of a pro-metabolic thyroid enhancing diet – with lots of dairy protein, some saturated fats and plenty of sugar from easily digestible sources – there are a number of genuinely anti-inflammatory things which can help to improve overall function in relation to cholesterol and heart disease.

Aspirin and glycine are known to be extremely protective, whereas the non-aspirin NSAIDs have been demonstrated to be a factor promoting cardiovascular and other disease states.

Cholesterol as risk factor for mortality in elderly women.

The relationship between cholesterol and survival in patients with chronic heart failure.

High cholesterol may protect against infections and atherosclerosis

Lack of an association or an inverse association between low-density-lipoprotein cholesterol and mortality in the elderly: a systematic review

Association of dietary, circulating, and supplement fatty acids with coronary risk: a systematic review and meta-analysis.

Saturated fat does not clog the arteries: coronary heart disease is a chronic inflammatory condition, the risk of which can be effectively reduced from healthy lifestyle interventions

THE NITRIC OXIDE HYPOTHESIS OF AGING

Effect of dietary linoleate content on the metabolic response of rats to Escherichia coli endotoxin.

Causes and consequences of low grade endotoxemia and inflammatory diseases.